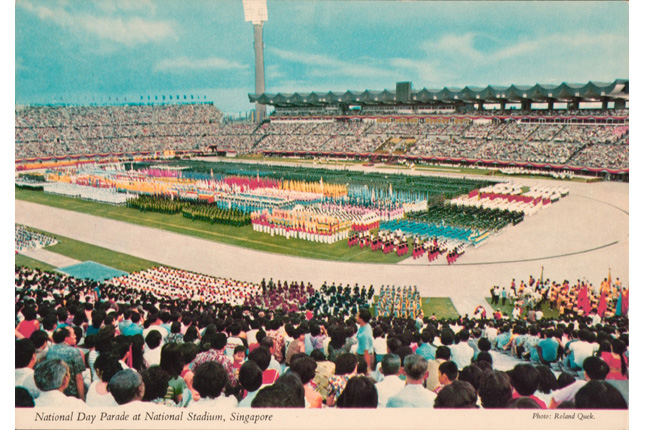 The beloved National Stadium was the site of sporting triumphs and losses, celebrations and concerts. It birthed sporting legends as well as the euphoric Kallang Roar and communal Kallang Wave. Its soaring concrete frame also hosted tens of thousands of Singaporeans who, on 18 occasions, gathered in a sea of red to mark the nation’s birthday.

The site was not reserved for Singaporeans alone. When international headliners such as Michael Jackson and Mariah Carey took the stage, music fans from across the region descended upon the arena in Kallang to get in on the action. Built for the people, the venue took its final bow in 2011 — 38 years after it was completed, closing the chapter on what was once Southeast Asia's largest stadium. The 1988 Singapore Youth Festival opening ceremony at the National Stadium.

A shot in the arm for Singapore’s sports scene

Apart from new flats and factories, freshly independent Singapore was soon to get its first Olympic-standard stadium. It was December 1965 and Minister for Culture and Social Affairs Othman Wok had just recommended the construction of such a venue during a budget debate in parliament.

It must have been a fairly tough crowd to convince — sports was low on the list of priorities for the fledgling new nation. But Mr Othman justified it as an investment for the people, arguing that it would spark a sporting culture and place Singapore at the ”forefront in the field of international sport”.1 The cost of the project could be partially covered by proceeds from a legalised lottery, he added.2

His proposal was given the go-ahead and work began a year later in Kallang with Mr Othman driving in the first pile for the $50 million endeavour. Minister for Culture and Social Affairs, Othman Wok at the construction site of the National Stadium on 7 December 1966. (Image from the National Archives of Singapore) An image capturing the first phase of construction works. (c. 1967. Image from the National Archives of Singapore) Minister of Finance Dr Goh Keng Swee was invited to lay the project's foundation stone and bury a time capsule on 23 February 1970. (Image from the National Archives of Singapore)

The stadium, the largest in Southeast Asia upon completion, had a barebones Brutalist design. Open-air with a concrete structural frame, it also housed state-of-the art features.3

In 1973, Singapore pulled out all the stops for its grand opening. An Olympic torch was shot into the night sky, trumpets were sounded and a 1,000-strong choir sang for the crowd. In his opening address, Prime Minister Lee Kuan Yew shared that while the stadium was a massive financial undertaking, it could become a “great” social asset if it was “fully and properly used”.4 Chairman of the National Stadium Corporation, Dr B. K. Sen, speaking at the official opening of the venue on 21 July 1973. The stadium was declared open by Prime Minister Lee Kuan Yew. (Image from the National Archives of Singapore)

The people responded well to the stadium. It was a timely addition to the city and a vast improvement to the 10,000-seater Jalan Besar stadium, which failed to meet international standards.

The same year, the grand dame played host to the 7th Southeast Asian Peninsular Games as well as boxing world champion Muhammad Ali for exhibitions bouts as part of his tour of the Far East.

It was also the holy ground of football. Fans of team Singapore snapped up tickets during the 1970s, 1980s and mid-1990s to watch the Lions take on their rivals in the Malaysia Cup.5 From the stands, they cheered on their favourite players to sizzling, nail-biting finishes and were treated to gravity-defying kicks and great sportsmanship. This explained the thunderous roars, also known as the Kallang Roar, emanating from its grounds. It was at this very arena that football legends such as Quah Kim Song, Dollah Kassim, Fandi Ahmad and Varadarju Sundramoorthy, were born.6

The applause was not reserved for football heroes alone. Music fans kept their ears pricked for concerts by mega pop stars at the venue. They were not disappointed by the stadium’s entertainment line-up. The venue, with its 55,000 pax capacity, attracted headliners and big stars like Mariah Carey, Michael Jackson and A-mei. It was also the venue of choice for religious rallies and community events such as when Pope John Paul II visited in 1986.

Indeed, the stadium had something for everyone.

Some add that it was “unrivalled as a venue for the unreserved expression of patriotism for generations of Singaporeans”.7 Such sentiments were best experienced at all 18 editions of National Day Parades which took the stadium by storm. Singaporeans, seated snugly in the arena, bonded as they cheered on their fellow countrymen performing in mesmerising flypasts and vibrant mass displays. Dazzling fireworks ended off such heady nights. Spectators gathered under the blue, evening sky to mark National Day. A total of 18 National Day Parades were held at the grand old dame. (c. 1970s-1980s. Image from the National Museum of Singapore) The National Stadium’s expansive grounds served as the site for mass displays and parades of contingents. (c. 1970s-1980s. Image from the National Museum of Singapore)

The curtains came down on the grand old dame between the years 2010 and 2011 — its closure having been in the works since 2001. Following the stadium’s demolition, the present-day $1.33 billion Singapore Sports Hub, with up-to-date, world class facilities, was built in its place.8

The original landmark was closely documented during its final days, and a number of its fixtures such as turnstiles, floodlights and seats were salvaged.

Unfortunately, a time capsule with the stadium’s building plans, sports memorabilia and newspaper clippings from 23 February 1970, was never found despite the extensive use of metal detectors and a $50,000 reward. Empty grounds. Photographer Chow Chee Yong spent four months capturing the National Stadium’s last moments in the lead up to its tear down. (c. 2010. Image from the National Museum of Singapore) The stands come down. (c. 2010. Image from the National Museum of Singapore) These bulbs were part of a giant network of floodlights which once illuminated the stadium. (c. 1973-2007. Image from the National Museum of Singapore) An aerial view of the National Stadium 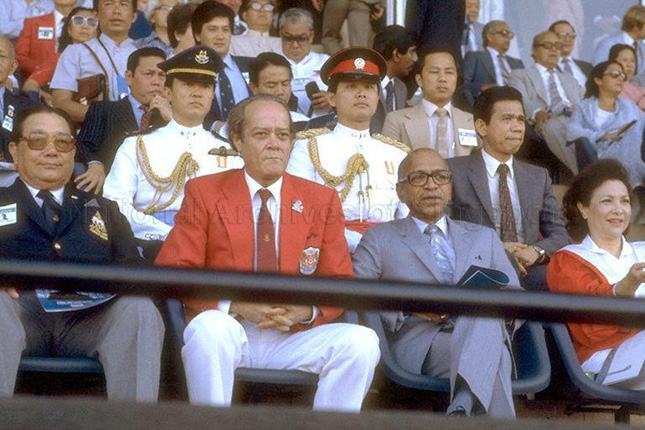 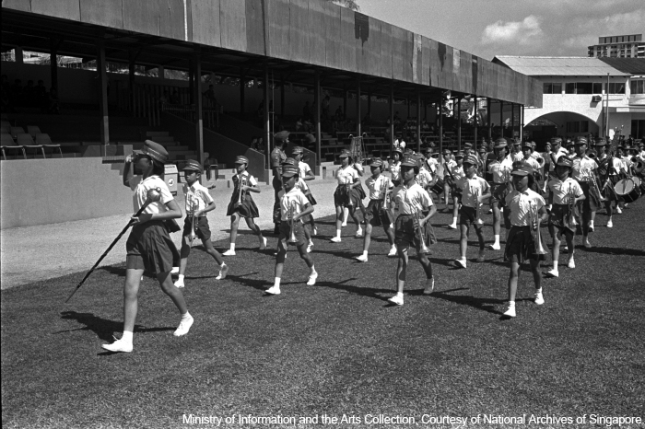