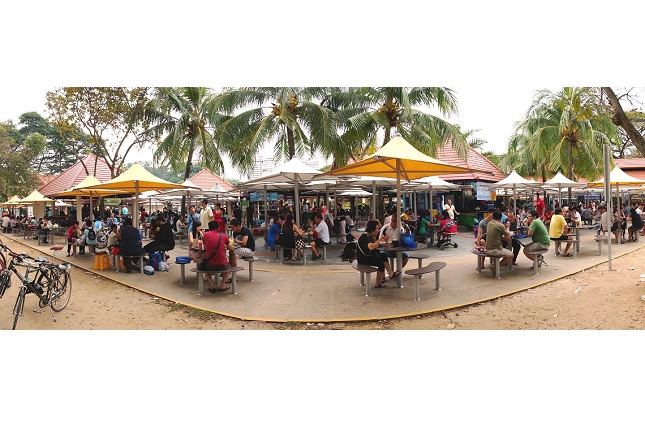 The East Coast Lagoon Food Village was built over land which was reclaimed from the sea. The reclamation that created the East Coast Lagoon was started in the 1960s. It was not until 1971 that the construction of the first housing blocks in the area began, and with this, the development of the beach front also commenced. The laying out of the lagoon (1972-76) also included provision for hawker stalls. It was in 1977, after the completion of the lagoon, that the concept of the hawker centre and its site was finally confirmed.

The construction of the new hawker centre started in April 1977. This single-level timbered structured eatery was designed in such a way that it blended in with the environment of the seaside and swimming lagoon. The cooking area was composed of 10 structures which had butterfly-shaped roofs while the eating areas had 40 pyramid-shaped top shelters.  It was completed in late 1978 at a cost of $685,000. The eating areas were “arranged in a series of courtyards to create interesting spaces and to act as covered links from one stall to another”. To give customers a better view of the lagoon, “the floor of the entire centre is raised”.

Most of the initial cooked food hawkers in this newly built hawker centre were relocated from Alkaff Lane, near the junction of McPherson Road and Serangoon Road.

However, the new food centre encountered challenging times soon after it opened for business. Despite having been Singapore’s only seaside hawker centre, it experienced relatively poor sales in the 1980s. It was towards the end of 1990s that the stalls in the food centre became “well-known among foodies island-wide”.  By this time, it also became a popular and choice weekend destination for those in search of their favourite food.

During the 2002-2004 revamp, which cost $4.5 million, the structure of the new food centre was transformed to reflected Balinese-style architecture to look resort-like. This round of renovation was had been part the Government's Hawker Centres Upgrading Programme. It seems that all 61 hawkers had opted to return when the works was completed, although they were given the option of accepting $23,000 for leaving. It was Mr Daniel Wang, Commissioner of Public Health (1981-2003), Director General of Public Health (2004), who told the architect to make full use of its unique location next to the beach, so that even people in swimming costumes could walk into the hawker centre to eat. When it officially reopened after the renovation in January 2004 it was renamed as the East Coast Lagoon Food Village.

In June 2013, four food stalls caught fire. Although only certain stalls had been damaged, the NEA, which had already planned for the centre to undergo an upgrading, took the opportunity the fire presented to close the hawker centre for 3 months for its upgrading programme that cost $1.5 million. It was during this upgrade that new roofing and timber flooring on walkways were also installed.