The former Fullerton Building is a prominent landmark situated at the mouth of the Singapore River. Most well remembered as the General Post Office (GPO) and having housed several government departments, this building has been a witness to many of Singapore’s milestones.

Postal service in early colonial Singapore was first handled by commanders of commercial sailing vessels; these vessels were usually given mail to carry. In 1823, this responsibility was passed on to a Master Attendant who was appointed to keep a register of ships in the port and the cargoes transiting through Singapore. The first “post office” shared a room with the Master Attendant’s Marine Office and the clerk to the Registrar of Import and Export.

As Singapore’s trade industry grew, the volume of mail increased. The post office moved to its own building near the Town Hall (today Victoria Theatre) and became a separate department from the Marine Office (in 1854 and 1858 respectively). Later in the 1870s, it moved again, this time across the river, to the site of the former Fort Fullerton. Its new location on the commercial side of the river greatly benefitted the merchants who frequently used the mail services. A new building was constructed for the post office in 1874, and was later replaced by a newer one in 1885 due to the rapid growth in postal services in that decade.

Completed in 1825, Fort Fullerton stood at the mouth of the Singapore River, protecting the Singapore harbour, river and trade. It was named after Sir Robert Fullerton, the first Governor of the Straits Settlements (1826-1830). In spite of the fortifications, the mercantile community feared that close proximity to the fort would make their riverside warehouses vulnerable to attacks. Given their concerns, the colonial authorities decided to demolish Fort Fullerton in 1865, at a time when Singapore was planning for new forts.

Construction of the Former Fullerton Building

At the turn of the century, discussions for a new post office building took place before the First World War (1914-1918). Major Percy Keys, a government architect for the Public Works Department, was appointed the architect for this project in May 1920, together with his assistant, Frank Dowdeswell. Construction began in February 1924, after the old building was demolished in 1922 and the post office had moved to its temporary quarters at Collyer Quay. On 27 June 1928, Sir Hugh Clifford, Governor of the Straits Settlements (1927-1929) declared the new building open and named it “Fullerton Building”, in remembrance of the site’s history as a fort and of Sir Robert Fullerton.

Building Design and Former Fullerton Building as the Centre of Communication

The former Fullerton Building’s Neoclasscial façade and prominent location reflected Singapore’s role as the prime postal unit in British Malaya at that time. Made of reinforced concrete, the building possesses five frontages with a colossal two-storey Doric colonnade, creating a visually impressive façade. At the entrance facing Fullerton Road stand two bronze tablets commemorating the commencement of the construction under Sir Laurence N. Guillemard and its completion under Sir Hugh Clifford. The building is adorned with ornate classical decorations crafted by Swiss sculptor Rudolf Wening and Italian sculptor Cavaliere Rudolfo Nolli. Nolli was also responsible for the sculptural works at the former Supreme Court and College of Medicine Building, and Wening designed the mould for the sculptures at the Cenotaph.

The former Fullerton Building was designed to be multi-purpose, housing the General Post Office (GPO), the Singapore Club, the Chamber of Commerce, the Marine Office and other government departments. The GPO occupied the basement and first floor which served as sorting rooms, postal halls and offices. The upper floors were reserved for the Singapore Club’s facilities, which included dining room, lounge, billiard room and sleeping quarters.

At the time of its completion, the building boasted modern facilities – 14 lifts in the building and automated mail-sorting equipment for the post office. The high-ceilinged postal hall and courtyards created an airy interior. Highlights of the building included a 300-foot-long postal counter which ran from the main entrance of the post office to along the side facing Fullerton Road, and the vaulted coffered ceiling of the Singapore Club (located at the fourth floor). This ceiling, which still can be seen today, was described to be unique in Singapore.

Through the GPO, the former Fullerton Building played an important role in Singapore’s communications with the world, as mail was the main mode of long-distance communication then. The post office was designed such that the time taken to sort and dispatch mail would be minimised. This enabled the General Post Office to cope with the huge volume of mail and customers, especially during peak seasons such as Christmas. There was even a tunnel which ran under Fullerton Road, connecting the GPO to the pier, to allow for efficient transfer of mail between the GPO and ships. This tunnel stopped functioning after the Second World War.

During the Second World War, Singapore was heavily bombarded by the Japanese. Sir Shenton Thomas, Governor of the Straits Settlements (1934-1946), and his wife sought refuge in the Singapore Club in February 1942, as the Government House was no longer safe. In the days leading up to Singapore’s fall, the former Fullerton Building served as a hospital, providing makeshift operation rooms for wounded British soldiers. The British eventually surrendered on 15 February 1942, after Lieutenant Arthur Percival (Lieutenant-General and General-Officer-Commanding Malaya) had informed the Governor of the decision to surrender, at the Singapore Club.

The Japanese swiftly moved in and commandeered many government buildings. The military administration department occupied the former Fullerton Building while the civilian administration was based at the former Municipal Building. Shortly after Singapore’s fall, the Japanese demanded an “atonement fee” of $50 million from the Chinese in Singapore and Malaya, as they had supported China’s Nationalist Government’s war efforts against the Japanese. The Chinese community managed to raise the sum despite the war-time difficulties. The cheque of $50 million was presented to Lieutenant-General Yamashita in February 1942, in the Singapore Club. The government offices and the Singapore Club returned to the former Fullerton Building after the war, and the General Post Office remained in the building until the 1990s.

Following Singapore’s attainment of self-government status in 1959, the former Fullerton Building housed several government departments that played important roles in Singapore’s nation building. It was where some notable pioneer leaders began their careers, including former Deputy Prime Minister Dr Goh Keng Swee who started out as the Minister of Finance in 1959, former President Mr S. R. Nathan who worked as a Seaman’s Welfare Officer in the Ministry of Labour and later in the Labour Research Unit in the 1950s and 1960s, and former Prime Minister Mr Goh Chok Tong who worked in the Economic Planning Unit in the 1960s.

Government departments that were once housed in this building include the Ministry of Finance, the Inland Revenue Department (today Inland Revenue Authority of Singapore), and the Economic Development Board (EDB). The Ministry of Finance was based in the former Fullerton Building until 1978. Policies to steer a newly-independent Singapore’s economy were conceptualised and realised in this building. For instance, to oversee Singapore’s industrialisation programme, the EDB was formed with Mr Hon Sui Sen as the Board’s first Chairman, in 1961. It held its first meeting in its office in the former Fullerton Building.

“Pioneer certificates”, certificates issued to attract foreign companies to Singapore to provide employment opportunities and support its industrialisation efforts, were also presented to companies in the former Fullerton Building. The Monetary Authority of Singapore (MAS), formed in 1971 as the government’s banking and financial agent, also had its first office there. The former Fullerton Building was also the centre of Singapore’s revenue generation, having housed the Inland Revenue Department (today Inland Revenue Authority of Singapore) from 1960 to 1995.

From the 1950s to the 1980s, the former Fullerton Building witnessed several political rallies that were held at the Fullerton Square. Huge crowds attended the rallies, including many that were delivered by Singapore’s founding Prime Minister Lee Kuan Yew.

In 1996, the Government announced plans to turn the Fullerton Building into a hotel. The building underwent conversion between 1997 and 2000, and was declared open as The Fullerton Hotel on 1 January 2001 by then-Prime Minister Goh Chok Tong at midnight. 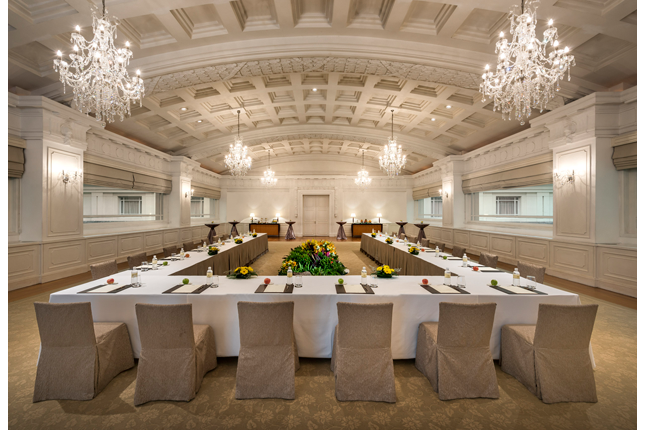 A view of Fullerton Building 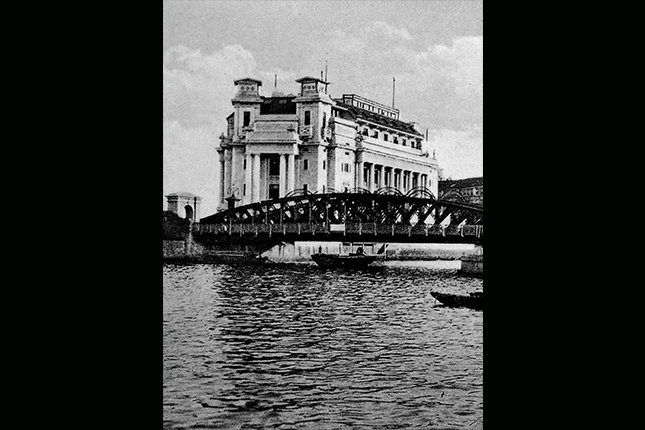 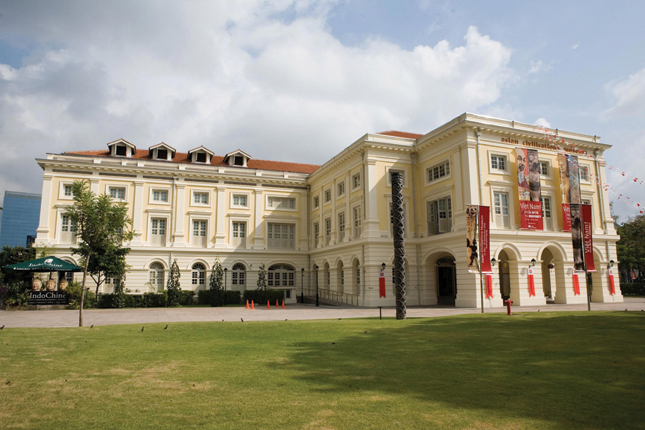 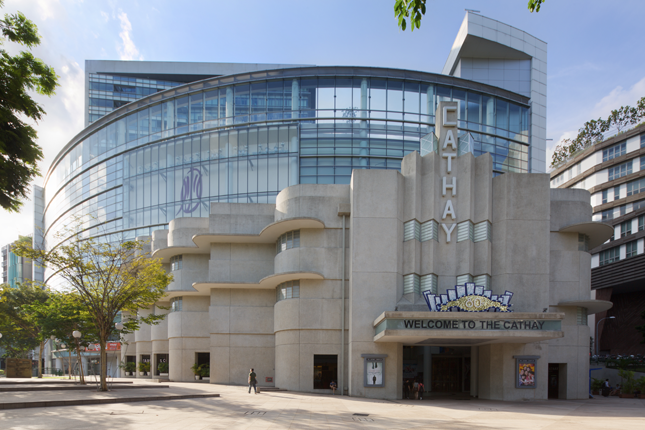