Standing atop a little hill, the Church of Saint Teresa was originally constructed for the spiritual needs of the Hokkien-speaking Catholics living in the town area. The magnificent edifice testifies to the religious and architectural contributions of Catholic missionaries, and also the growth of the local Chinese Catholic community in the early twentieth century.

Although the Hokkien Chinese made up one of the largest Chinese dialect groups in Singapore, few of them converted to Catholicism – possibly because there was no church at that time that offered Hokkien sermons. Thus, the need to found a third Chinese parish church for the Hokkien Catholics became increasingly apparent over time.

New Church for the Hokkien Catholics

Right Reverend Monsignor Emile J. Mariette, a priest from the Society of Foreign Missions of Paris (MEP) who was based at the Church of Saints Peter and Paul, spearheaded the building of the new church. Having mastered both Hokkien and Teochew, he was appointed to take charge of the Chinese Roman Catholic community in Singapore. Assisting him in the building project was Reverend Father Stephen Lee from Malacca. On 18 April 1927, the foundation stone was laid by Coadjutor Bishop of Malacca Pierre-Louis Perrichon, MEP. The construction of the church had, however, already begun earlier that year.

A tragedy struck on 13 March 1928. Monsignor Mariette was inspecting the construction progress on site when a plank fell from the top of the steeple and hit him on his head. He was rushed to Outram General Hospital, but passed away soon after. He was buried in Bidadari Cemetery two days later. Father Lee then took over the supervision of the building project.

The church was completed and officially opened on 7 April 1929. Bishop Perrichon blessed the ecclesiastical edifice before a crowd of approximately 6,000 people, including Governor Hugh Clifford, Lady Clifford, and members of the local and Malayan clergy. The grand ceremony was then followed by a Pontifical Solemn High Mass in the newly blessed church, which was dedicated to Saint Teresa (or Thérèse) of the Child Jesus and the Holy Face from Lisieux, France.

After the Catholic Church acquired the surrounding land in 1934, a Catholic settlement quickly developed around the Church of Saint Teresa. In 1935, Father Lee founded and built Saint Teresa’s Sino-English School to provide education for the children living in the vicinity. He also actively supported the construction of the Monastery of Christ the King on Bukit Teresa to house the contemplative Carmelite nuns, who arrived in Singapore in 1938.

The Church of Saint Teresa is the only Catholic building in Singapore featuring the Romano-Byzantine style, which is defined by the extensive use of grand domes, cupolas, and arches. Reverend Father Jean M. Ouillon, the Procurator of the MEP in Singapore, was deeply inspired by the architecture of the Basilica of the Sacred Heart in Montmartre, Paris, France, when he drew the initial sketches of the church’s design. Emile Brizay, who also designed the Former Ford Factory, prepared the final architectural plans.

Defining the church’s exterior is an imposing dome that caps the sanctuary. A pair of towers topped by twin cupolas flanks the main entrance. Windows on the sides of the church are set within triple arches and are adorned with decorative designs comprising a cross within a circle. Such fenestration, together with the clerestory windows, provided ventilation for the church interior before air-conditioners were installed.

The most outstanding feature inside the church is the ciborium (canopy) over the high altar, which is crowned by a cupola. Supported by tall columns, each of the pediments at the top of the impressive structure has a circular wreath design in the centre. Within the wreath are four Greek letters: a chi (‘X’) superimposed on a rho (‘P’), forming the Chi Rho, which is a symbol referring to Jesus Christ; and an alpha (‘A’) and omega (‘Ω’) at the sides, which represent the idea of God being the beginning and the end.

Behind the altar are three stained-glass windows with six panels each. The French-made panels depict the key events from the life of Saint Teresa of Lisieux and were contributed by Reverend Father Ouillon; Reverend Father Nicolas J. Couvreur, a retired Procurator of the MEP; and David Wee Cheng Soon, a charitable parishioner.

In 1958, the Singaporean wing of the Apostleship of the Sea, an international Catholic association that serves the spiritual needs of seafarers, was launched in the Church of Saint Teresa and is still based there today. The church’s congregation now comprises of Catholics from various ethnic groups. 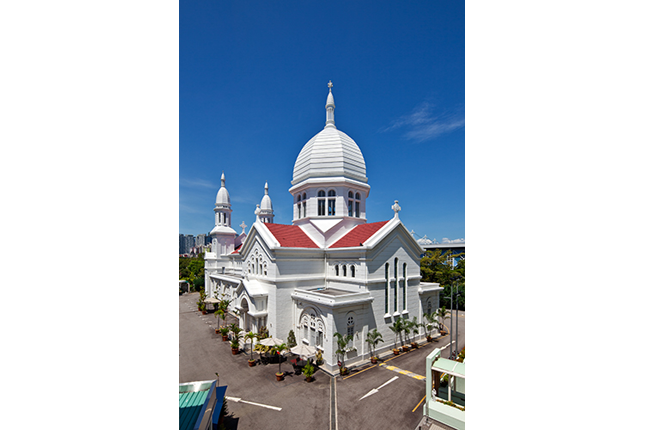 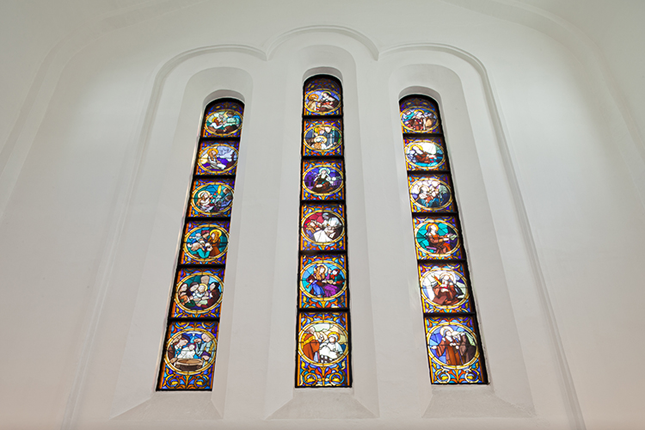 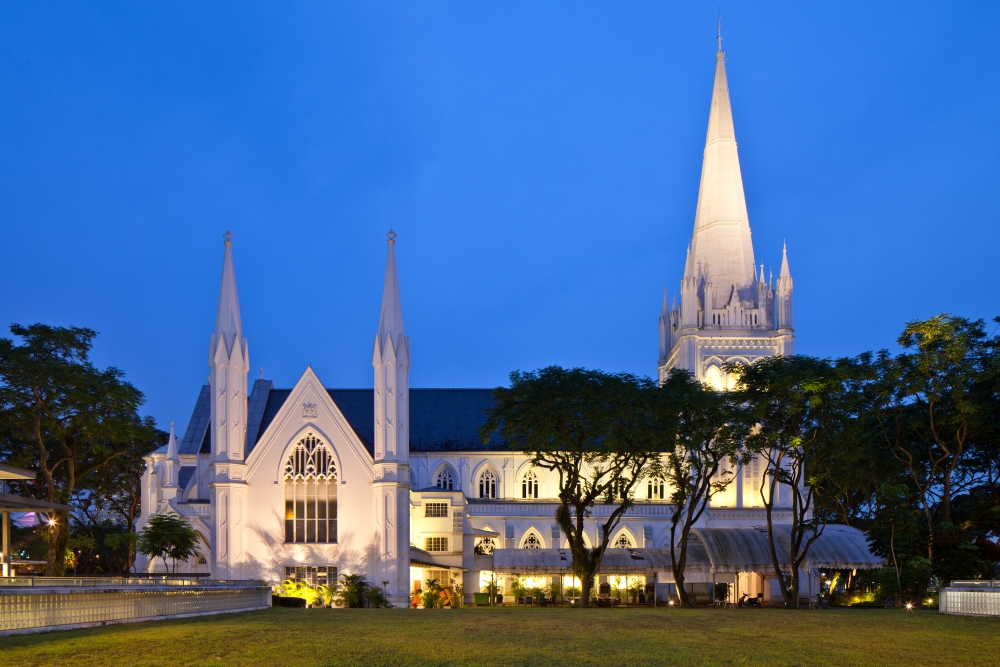