Masjid Mujahidin is the second mosque designed by the Housing and Development Board (HDB) under the Mosque Building Fund (MBF). Built at a cost of $900,000, the Mosque was officially opened on 9 October 1977 by then Acting Minister for Social Affairs, Dr Ahmad Mattar, to house a growing number of worshippers and provide adequate facilities to conduct religious classes and Islamic learning programmes. Before the existence of the mosque, religious classes were conducted at the nearby Police Reserve Unit as  the surau or prayer halls within the estate were not large enough.

The Mosque was the result of 11 years of hard work in planning and fundraising by the Muslim community in Queenstown who collaborated with Majlis Ugama Islam Singapura (MUIS). The Building and Construction Committee of the Mosque was first established in 1967 to organise fund-raising through the sale of calendars islandwide and food bazaars conducted in nearby housing estates. When it opened in 1977, specialised departments in education, youth, religion and welfare were established at the mosque.

An annexe building was later built to house the administration office, a boardroom, classrooms, a multi-purpose hall and a computer room. In 1994, the mosque added its rear wing with classrooms. It was completed on 26 March 1994.

Due to the demand for more prayer space and to meet the changing needs   and expectations of the community, the mosque was upgraded in 2013. New spaces and barrier-free facilities were introduced when the upgrading works were completed and officiated by Dr Yaacob Ibrahim, Minister for Communications and Minister-in-Charge of Muslim Affairs on 4 April 2014. The upgraded mosque also incorporate an office for the Kampong Holland Mosque Committee to plan and implement programmes and activities for congregants from Holland Village and Buona Vista areas. 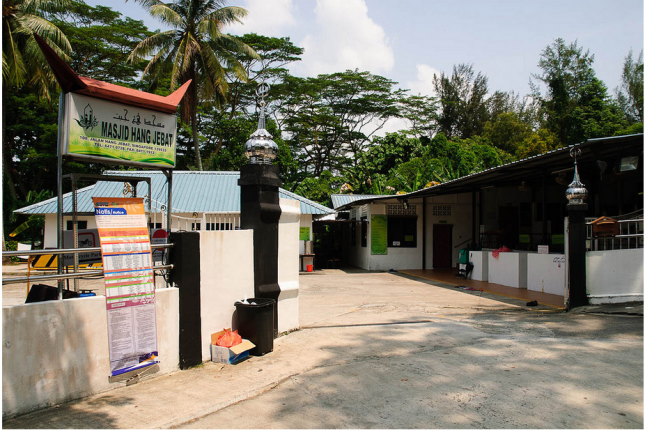