The Singapore to Bukit Timah section of the Singapore-Kranji Railway (also known as the Singapore-Johor Railway) opened on 1 January 1903, with the town end of the line located at Tank Road. The Bukit Timah to Woodlands section followed on 10 April 1903, and from Woodlands, passengers made the connection to Johor via ferry. At its inception, a one-way first class fare from Singapore to Bukit Timah cost 56 cents with a return fare at 84 cents, while third class fares were priced at 21 cents and 32 cents respectively.

Much like the effect of Mass Rapid Transit (MRT) lines today, the railway precipitated the growth of Bukit Timah as a residential suburb. With the line running parallel to Bukit Timah Road until the 7th milestone (near the present-day King Albert Park), the stations at Cluny Road, Holland Road and Bukit Timah encouraged residents living in town to move to these areas. As a result, residential estates soon replaced former plantations and burial grounds.

The opening of the Causeway in 1923 allowed trains to bridge the Johor Strait, and also enabled goods and commodities to flow unimpeded between ports at Penang and Singapore. These commodities included tin and rubber, both of which formed the backbone of the colonial Malayan economy. Locals also used trains to travel to Malayan holiday destinations such as Port Dickson, while Malayans made their way to Singapore for leisure and work.

The railway was realigned in 1929 to accommodate the new terminus at Tanjong Pagar, which began operations in 1932. That same year, a new Bukit Timah Railway Station was built near King Albert Park and located on higher ground to avoid the frequent flooding that disrupted services at the former station.

The new station was constructed in the style of traditional small town railway stations found in the United Kingdom and is reminiscent of European country cottages. The single-storey building had an open platform and six structural bays, as well as a stationmaster's office, open and closed waiting areas, and a signals office. The station also served as an unloading point for racehorses due to its proximity to the former Singapore Turf Club.

Like the rest of the railway line after it was sold to the Federated Malay States Railway (FMSR) in the 1910s, ownership of the Bukit Timah Railway Station and the land it sat on was later transferred to FMSR’s successor, Keretapi Tanah Melayu (KTM). When KTM ended train services between Woodlands and Tanjong Pagar in 2011, Bukit Timah and other stations likewise ceased operations.

The now-defunct Bukit Timah Railway Station is the only suburban station which still stands today, and it is often frequented by railway, heritage and photography enthusiasts. As a well-loved local landmark, the station itself was accorded conservation status by the Urban Redevelopment Authority in 2011. Two railway truss bridges, at Fuyong Estate and on Bukit Timah Road near King Albert Park, have also been conserved. 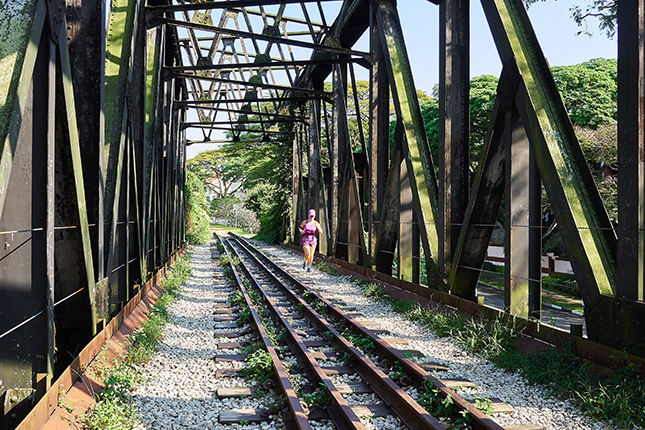