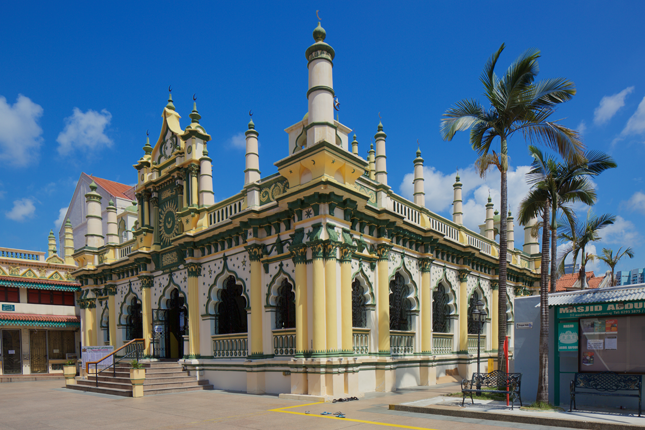 Abdul Gafoor Mosque's charming architecture stands out amidst the surrounding shophouses in the historic Little India district. The living monument testifies to the contributions of Tamil and Baweanese pioneers in the development of colonial Singapore.

The history of Abdul Gafoor Mosque can be traced to an earlier mosque, Al-Abrar Mosque (then also known as Dunlop Street Mosque, and not to be confused with Al-Abrar Mosque on Telok Ayer Street), which was erected in the mid-1800s. It was founded to serve the spiritual needs of Tamil Muslim immigrants from South India who traded in Kampong Kapor, as well as Baweanese syces (horse groomers) and horse trainers who worked at the old race course at the nearby Farrer Park.

In 1881, Shaik Abdul Gafoor bin Shaik Hyder, the chief clerk in the law firm Khory & Brydges, became one of the two trustees of the Dunlop Street Mosque wakaf (endowment). Following a deed of assignment dated 14 November that same year, a plot on Dunlop Street was conveyed in trust for the building of a new mosque.

Shaik Abdul Gafoor proposed and initiated the building of shophouses and sheds around the old mosque - some of them are still standing today. Profits received from renting these spaces were used to fund the new brick mosque. Construction of the mosque commenced in 1907, and three years later, the old Al-Abrar Mosque was demolished.

Prior to his death in 1919, Shaik Abdul Gafoor ensured that provisions were made for the completion of the mosque and for rituals to be conducted there in honour of Prophet Muhammad. The mosque was later renamed Abdul Gafoor Mosque in memory of him.

In 1998, a basement in Abdul Gafoor Mosque that had been long forgotten was rediscovered. The mosque’s committee had previously mistaken the underground vault for a huge storage space and made plans to expand the prayer hall to accommodate more worshippers. Fortunately, the architect of the development project found the mosque's original building plans in the National Archives of Singapore, which revealed the existence of a spacious basement. After refurbishment, the air-conditioned basement can hold 600 people, increasing the main prayer hall's capacity to 1,200.

Blending Saracenic and Neoclassical elements together, the design of Abdul Gafoor Mosque is beautifully eclectic. Among the Saracenic features are the exquisite cinquefoil arches with heavy mouldings around the verandahs of the prayer hall. These are juxtaposed with the numerous Neoclassical Corinthian and Doric pilasters. Crescent moon and star motifs – symbols widely associated with the Islamic faith – embellish the exterior walls. Minaret-like features line the roof parapet, each crowned with a miniature ogee-shaped (onion-shaped) dome and a crescent moon.

Above the main entrance is one of the mosque's most outstanding features: an elaborately decorated sunburst flanked by two fluted pilasters and topped by an ogee-shaped pediment. The intricate sunburst design is adorned with the names of the 25 most prominent Islamic prophets – from Adam to Muhammad – in elegant Arabic calligraphy.

The grand cupola rises as an octagonal structure on the roof and has eight windows with colourful glass panels. Capping the cupola is a large ogee-shaped dome, which is then topped by a crescent moon and a star on its pinnacle. Inside the mosque, four large cluster columns and semi-circular arches supporting the structure of the cupola add grandeur to the prayer hall. Various Arabic calligraphy panels further contribute to the religious atmosphere within the mosque. 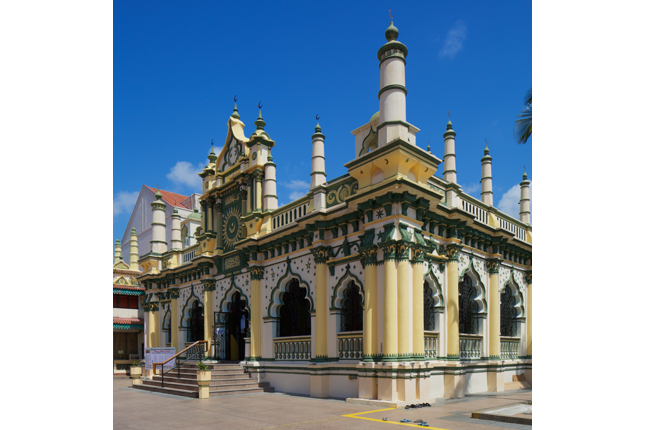 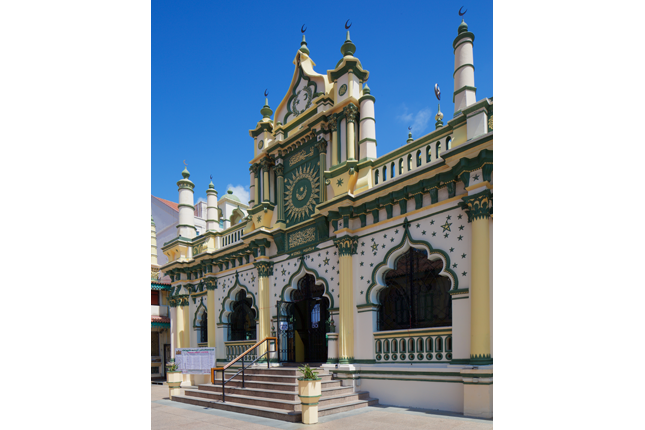 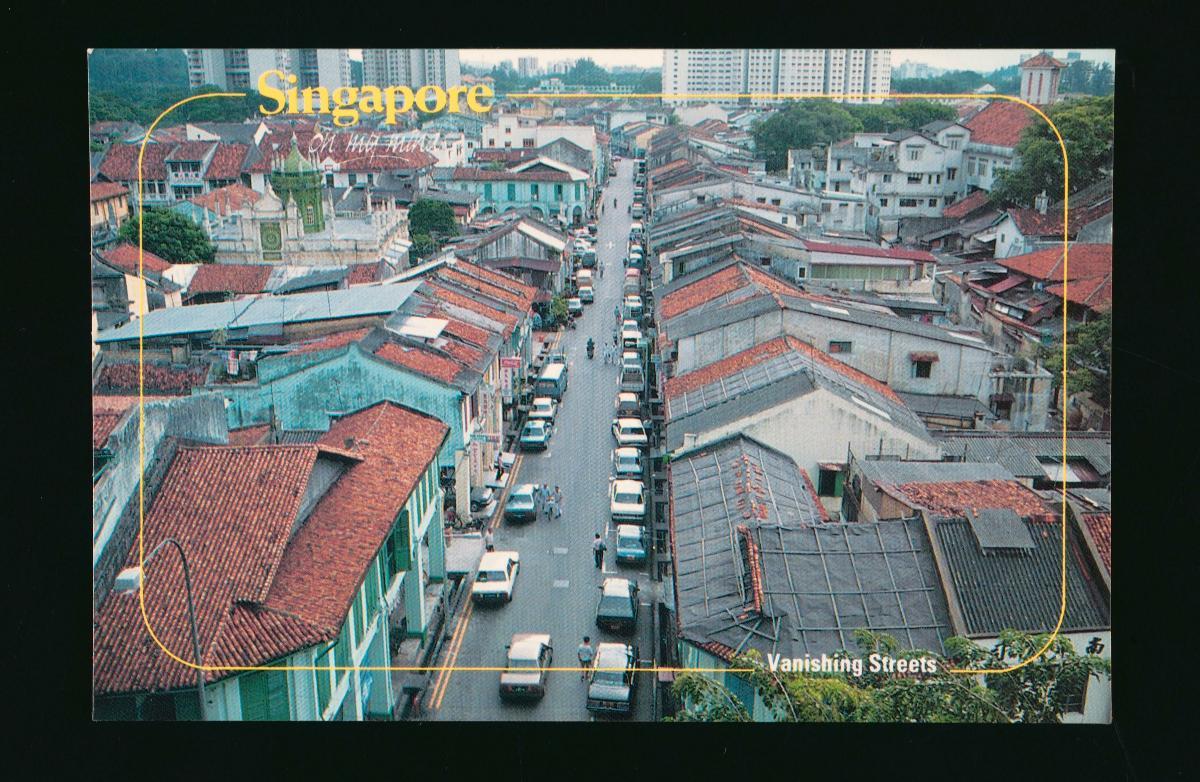 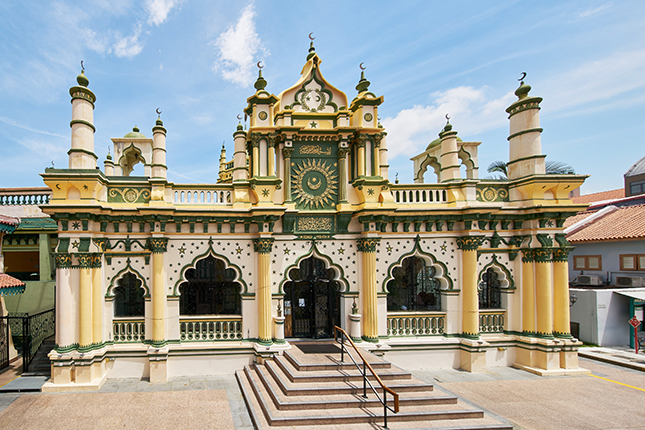 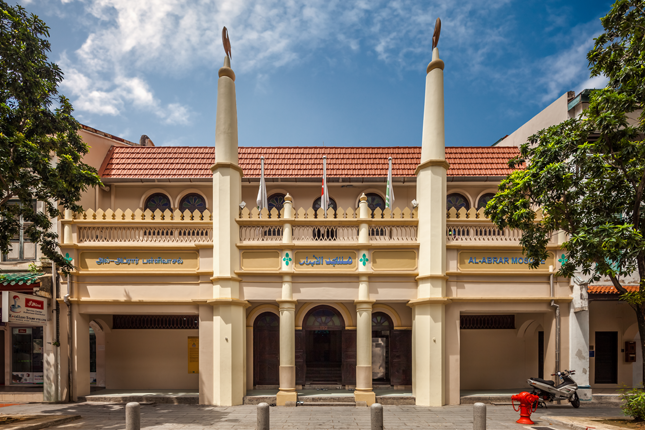